What your VP Voice candidates want to change at Surrey

What your Union Chair candidates want to change at Surrey

What your Presidential candidates want to change at Surrey

What your Activity Zone candidates want to change at Surrey

What your Team Surrey Chair candidates want to change at Surrey

What your VP Activity candidates want to change at Surrey

What your Support Zone candidates want to change at Surrey

What your VP Support candidates want to change at Surrey

What your Community Zone candidates want to change at Surrey

What your VP Community candidates want to change at Surrey

Karen, the contentious diminutive thrown across the internet, manifesting in memes, tongue in cheek TikToks and opinion pieces that chronicle the women who weaponise their whiteness. Usually said individuals are videoed lording their entitlement over POC or Black people by threatening to call the police on black people going about their lives or throwing PPE masks on the floor of Target, and using their whiteness mired with their ‘vulnerability’ as women to act contemptibly at best and dangerously racist at worst.

A multi-faceted term thrown around as casually as ‘millennial’ is by no means a one stop shop for understanding the complexities of intersectional feminism, but it is representative superficially of the difficulties encountered in the crossroads between race and gender. A recent discussion generated after the question of “How can white women not be Karens?” was posed on the BBC podcast ‘No Country for Young Women’ hosted by Monty Onanuga and Sadia Azmat led to outbursts of anger. With guests Chicken Shop CEO Amelia Dimoldenberg and historian Dr Charlotte Riley accused of touting a deeply racist and misogynistic line upon publicly funded platform, the BBC, which should be representative of the people who fund it… Yet, the same outrage is not generated by programmes such as Antiques Roadshow which arguably do not cater to anyone other than old white people with a nostalgia for watching other white people salivate over colonial relics.

So why is it that a fringe podcast, one of hundreds available on the platform BBC Sounds, has enraged the right and has led Conservative MP Ben Bradley to cancel his TV license due to “racist” content?

The brief discussion, which was part of a wider episode discussing the history of feminism and racism begged the question as to why Conservatives are so butthurt when a conversation about white women’s privilege is raised briefly on a niche platform – which one can choose to listen to or not – which specifically addresses race, gender and class issues. In the reasoned exchange, Dr Riley suggested that “I think a lot of the time when women are Karens it is because they are completely unwilling to accept that their whiteness is a privilege and, you know, instead they want to be treated in a special way because they are women.”, with Dimoldenberg offering that white women should “read some books”, “get out of the way” and “stop being so loud”. 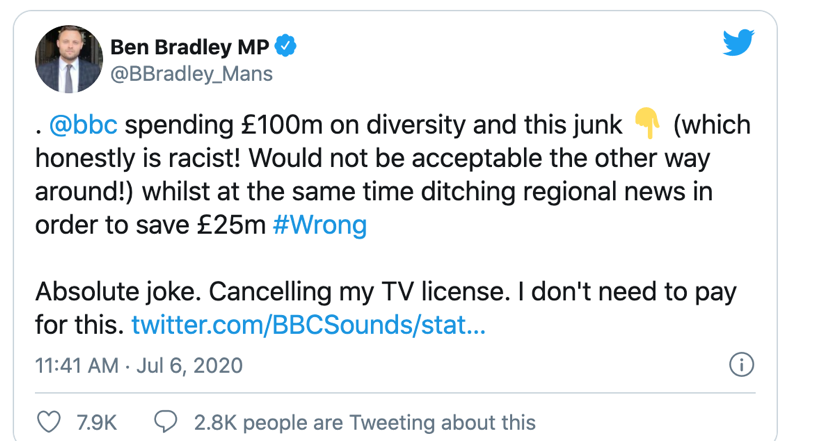 Unfortunately the podcast was perceived by many as “bullying”, “regressive to women’s rights” and (somehow) “racist”. This reaction, which stemmed from the conservative right, is in itself demonstrative of white people not wanting to listen and choosing to protect the structures of power which afford them the privilege of being “offended”, by policing the conversations which intersect between feminism and racism. Instead of listening and understanding why many white women, by nature of society’s structure, cannot be immune to being architects, upholders and benefactors of racism, critiques drew upon “what about me” logic. The same venomous “but all lives matter” truisms, which inevitably seek to evade accountability and shield the white fragilities fearful of an equality that would deprive white people of their privilege.

Oppressors often curate a sense of victimhood in order to protect their own power. In this example, Conservatives, who usually appear in the form of men talking about how women are silenced, are sure quick to jump on the women’s rights liberation train, as soon as white privilege appears to be threatened. Through co-opting an antiquated women’s rights agenda, by intentionally reducing complicated issues such as intersectional feminism into one dimensioned, objective (mis)truths, it serves to subtly steer the conversation away from the matter at hand and shift the frame of attention; it is just another indirect strategy which enforces current racist structures of power.

So when individuals such as British activist and radio presenter Maajid Nawaz suggest that the Karen discourse is a slippery slope as apparently “If you legitimize “Karen” & “Gammon”, it won’t be long before “Leeroy” & “Abdul” become reciprocal insults”, he even goes further to say that the “BBC should be ashamed of silencing women by calling them pejoratives” (ironic given as he is literally minimising and ignoring the opinions of the female speakers in this tweet). However, this “false equivalence”, as put by Dr Shola Mos-Shogbamimu, of Karen as an ephemeral discursive marker ever being comparative to the historic and systematic targeted acts of violence towards black and POC communities is extremely dangerous. Yes Karen can be offensive if adopted to serve another purpose (such as a misogyny), but it is never racist.

Karenisms: one step forward for man two steps back for women ?

It is understandable that the Karen moniker could be misinterpreted as an insult steeped in misogyny and to an extent it is (what isn’t ?); women are vilified more unfairly and viciously than their male counterparts in public and private spaces. And it is easy for the original meaning of the term to be squandered for convenience – or co-opted to suit a sexist agenda. However, a Karen retort is not in amnesia of the patriarchy and the easy tendency for misogyny to rear its ugly head, it is simply isolating and critiquing the specific phenomena of white women capitalising on the power and privilege that being a white woman in our current society undeniably holds; the power to enact criminal damage without consequence, the power to scream at black people and endanger lives by calling the police without repercussions and the paradoxical power of exploiting women’s perceived vulnerabilities to further oppress black people and POC.

It is a multifaceted issue and it is complex. Women are oppressed, but they are also capable of being the oppressor and refusing to permit discussion around the entitlement of white women upholds oppressive structures of power. And shielding behind concerns of women’s rights or worse, the dedication to “anti-racism” against white people is inherently a racist mechanism to halt progressive and productive critical conversations about race and gender.

As a white woman you have a unique privilege and power which can be harnessed by  utilizing the perceived vulnerability of your femininity and casting your whiteness as a weapon to protect you; whether or not you do so is another question but failing to recognise this and arguing that Karen insults are sexist or oppressive is a complete refusal to engage in the reality of all-encompassing systematic structures of oppression, like racism.

It may feel uncomfortable, but white women are not above criticism, especially their feminism, and if your feminism isn’t intersectional we don’t want it!

We are the best new society at @SurreyUnion, and we’re very proud ❤️

Incite has asked all candidates in this years SU elections what they want to change at Surrey. Here's what the community zone candidates have to say.

In the running for VP Community is Pete Ferguson, Nathaniel Nelson-Williams, and Sam Galea. https://incitejournal.com/news/what-your-vp-community-candidates-want-to-change-at-surrey/